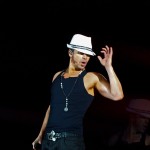 Jenny McCarthy Flirts With A New Kid On The Block Actress Jenny McCarthy seems keen to move on from her break-up with funnyman Jim Carrey following the revelation that there is a New Kid On Her Block. According to US magazine, 'People' the former Playmate is dating pop legend, Donnie Wahlberg from New Kids On The Block. The flirtation between the pair began back in … END_OF_DOCUMENT_TOKEN_TO_BE_REPLACED