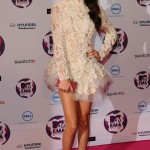 Selena Gomez Flirts With Union J's George Shelley Selena Gomez may have found herself a rebound after yet another split from Justin Bieber in George Shelley of British boy band Union J. In the past George has been very open about his crush on singer and actress, Selena and it looks like she has finally taken notice, now that her Bieber blinkers are finally off. On 7th … END_OF_DOCUMENT_TOKEN_TO_BE_REPLACED